Colin Clark, for me and for many others out there, is the Voice of WRC. Stage end reporter with unmistakable style and passion. I had the opportunity to hear his voice before the WRC season start this week in Monte Carlo. We discussed WRC, Rally Cross, Monte Carlo and Hyundai.

– Where are you from?
– Originally from Dundee, Scotland, but I traveled around a little bit since than and last 26 years I’ve been in Staffordshire, England. Here is where I’m happily settled now, almost more English than I am Scottish.

– How would you describe yourself?
– I’m a huge rally fan, I’m a little bit outgoing, a bit eccentric at times, quite loud and passionate about things.

– What does inspire you?
– Sports-wise it’s people who achieve, people who give it a go. People who want to compete and don’t complain about it. Folks who are from different backgrounds, maybe who are less privileged or with disabilities, but still give it a go and get on with it. That’s inspiring.

– Are you working on something at the moment?
– Very busy with WRC I have to say. 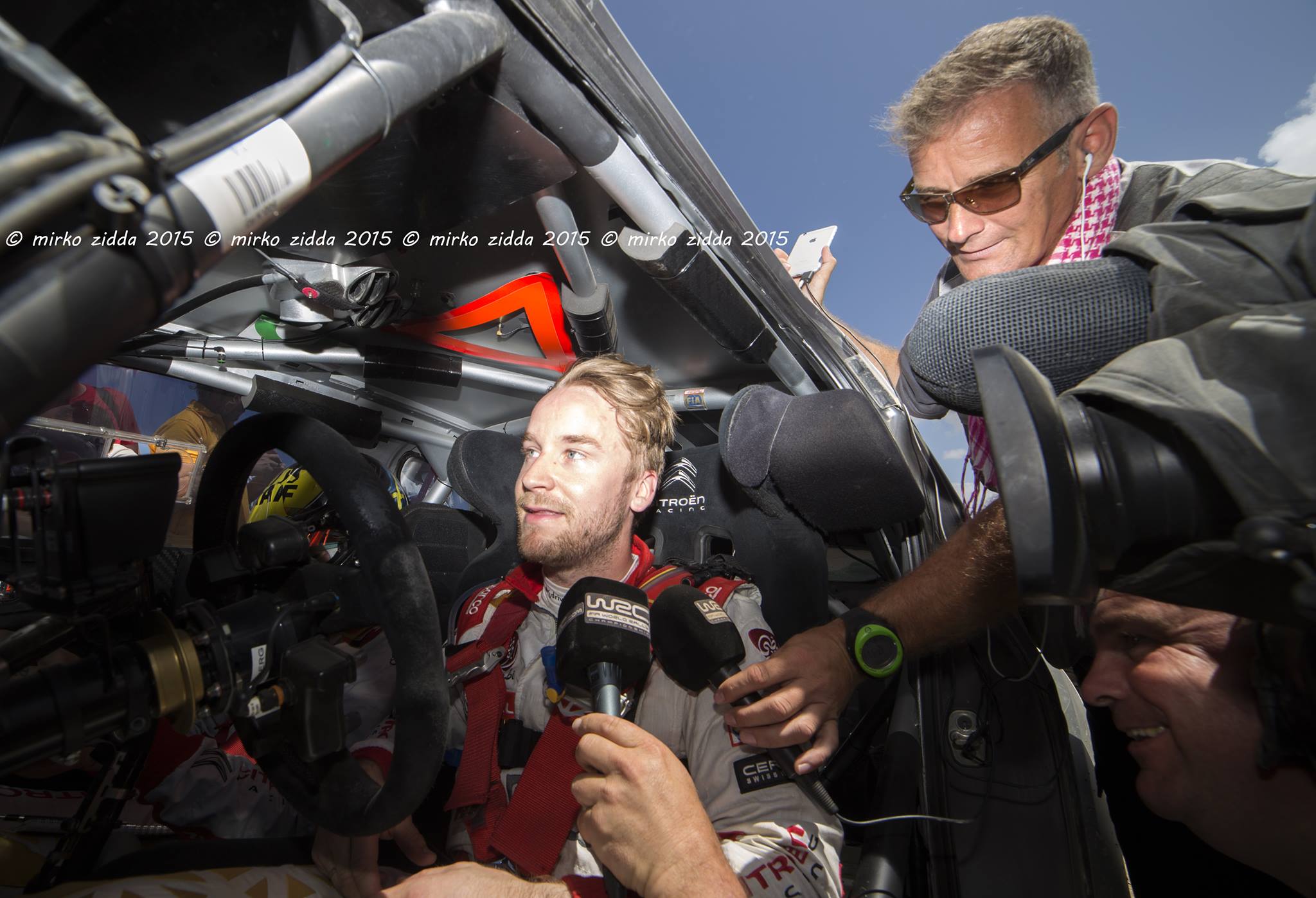 – Do you prepare for every rally or you improvise?
– You know, I don’t sit down and do homework. What is preparation.. I’m constantly keeping on top what’s going on in the rally world. Through social media, websites. I try to keep myself informed of what’s happening, where it is happening, why it’s happening. I don’t sit down and do background work on Robert Kubica, for example, I won’t sit down and study all his results for Monte Carlo last year. Homework for me is being involved. It’s part of my passion for the sport, I want to be up to date with what’s going on.

– Are you going to rallies in USA?
– I went once. One of my favourite rallies is the Oregon Trail Rally. It’s a fantastic rally, people who run it are great and the event itself is very well put together. I love to go back at some point. It’s a different level of rallying, there were only two very well prepared cars, Subaru manufacturer entry with Higgins and Pastrana, other than that it’s just a lot of very enthusiastic guys, who more or less built their cars in garages.

– What’s your most enjoyable part of rallying?
– I genuinely love it all. I even enjoy the travelling, I still enjoy airports. For me, the action at the stages is quite unique, and equally it’s the access we get to the drivers where I am at the end of the stages: drivers just driven 30-40-50 kilometres and helmets even didn’t come off, we’re able to talk to them immediately. Very-very few other sports give you this immediate access to world-class competitors. I love the excitement you get at the stage end, the drama you get for me it the most exciting part of rallying. 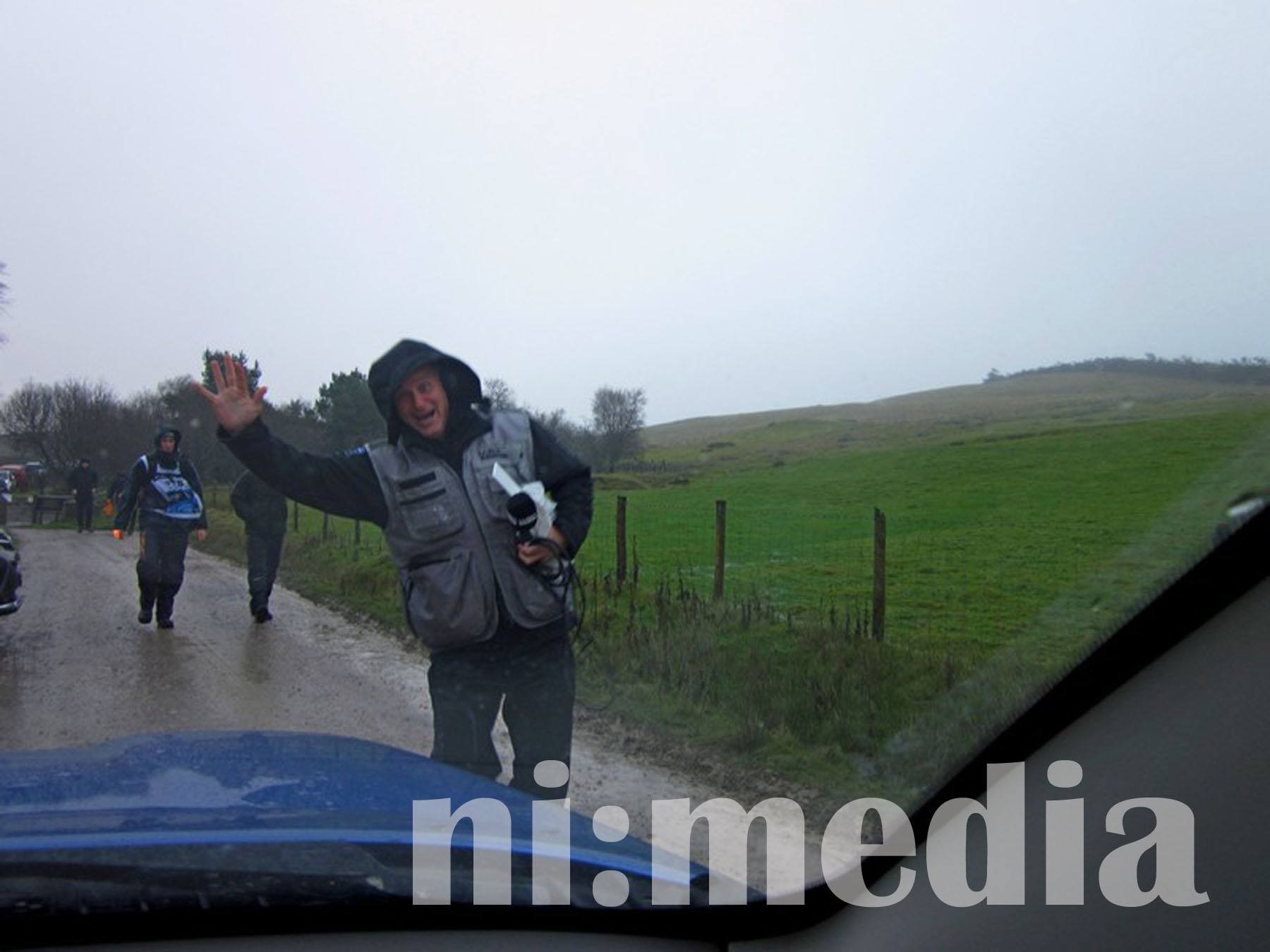 That was the rallying highlight, my work highlight was working in Middle Eastern Championship and discovering cross-country rallying. I loved every minute of it. I did two events in Saudi Arabia and Abu Dhabi Dessert Challenge and few other events that were incredible.

– Right now Loeb is proving that he’s competitive at Dakar Rally.
– In some ways it surprised me a little, I wasn’t completely surprised with kind of pace he was setting first couple of days.

– Yes, they were rally stages
– Exactly, and there is no one in the World who is quicker than Sebastian Loeb. There’s still a lot to play out in the Dakar, when they get to navigation-like stages, once they get into sandy dunes type stages, there are not so many of them this year, but for me that’s the big test. Not only for Sebastian and even more Daniel, but the car (Peugeot). Right now the car looks fantastic, compared to how bad it was last year. All three drivers are driving brilliantly. Nasser (MINI) basically said yesterday: “I’m driving absolutely flat-out and I can’t get near Peugeots”. 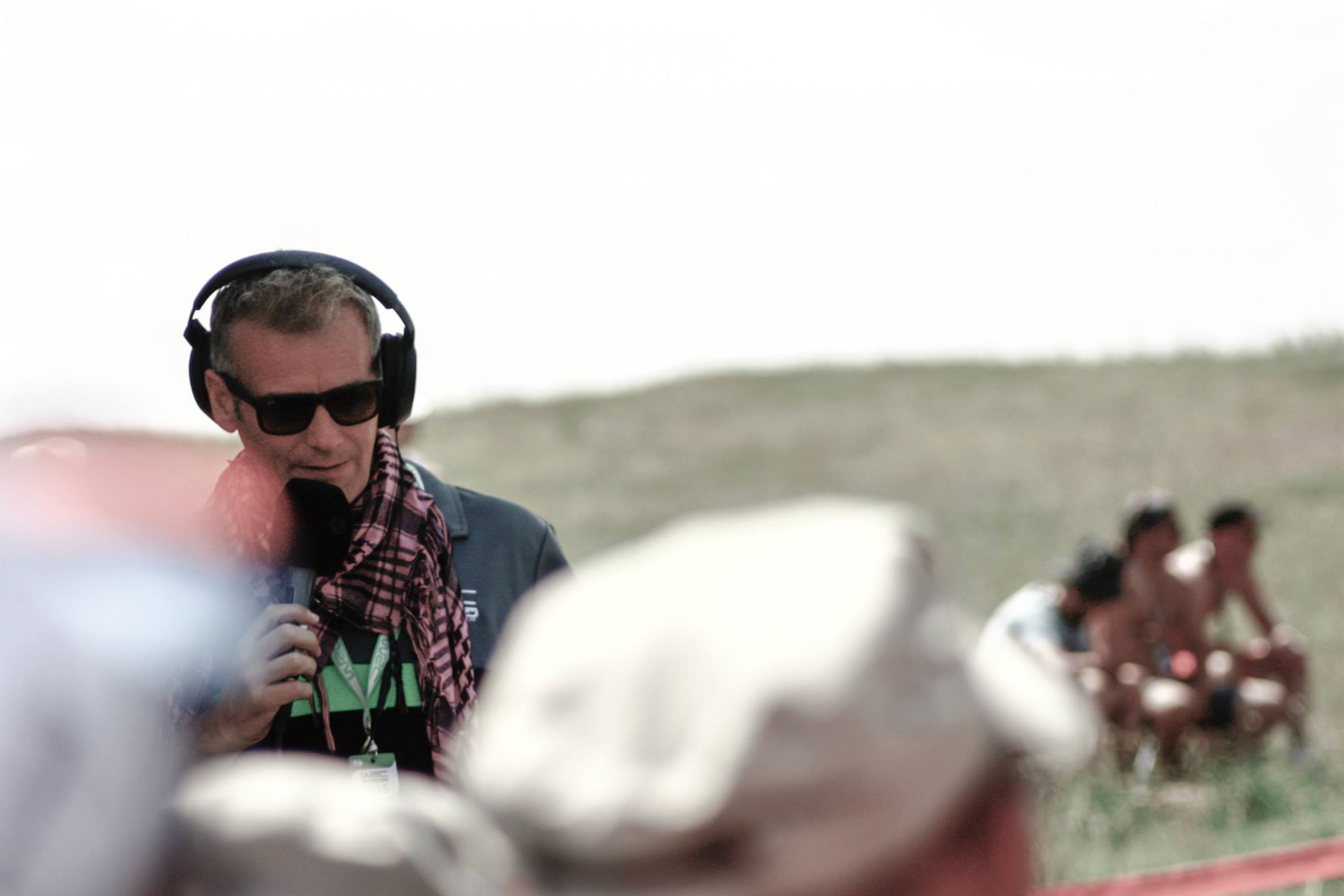 – Do you enjoy other forms of motorsports?
– I always enjoyed all sports, we were quite a sporty family. My big sport when I was young was field hockey. We would watch Gran Prix and rally highlights on the BBC, yeah, I enjoy all sports, but I’m passionate about rallying.

– What do you think about rally cross?
– It seems to be more popular now, it’s still, very much, in its early days. There are people who are worried that Rally Cross will take over classic rally, I genuinely don’t believe it would happen, but there is a lot we can learn from RX and how it packages itself. Races are moderately exciting, but I think there are a lot of big flaws there that are, perhaps, ignored in some ways. We don’t have that many Names in Rally Cross, in terms of quality, we’re not talking about the World’s best drivers flocking to Rally Cross, but let’s not take anything away from who are, like Petter Solberg, clearly a world-class driver.

– Two years ago you had an interview on one podcast and you were talking about how Red Bull just started to help WRC and that the aim will be introduce the sport to younger audience. What is the situation right now, how did things improve in two years?
– To be honest, has Red Bull been involved much in rallying, I’m not sure.. they are part owners of the WRC promoter. There is no question, that the WRC promoter has made steps forward, but there are still issues that need to be addressed, one of them is the direct focus on the younger audience. What they done so far, they gave the existing audience more access to the sport: TV coverage improved in quantity, online presence is better, WRC+ is a good tool, but these are all media offerings for existing rally fans.

– How did your personal career in reporting started?
– It’s quite a long story, but I’ll try to cut it short for you. I’ve got involved in rallying in 2002, I’ve worked for a tobacco company – British American Tobacco, they sponsored the Subaru Rally Team in the 90s with Colin McRae, we got back involved in sponsorship of Prodrive and I was responsible for it. That was part of my job as a promotions manager to look after that sponsorship. That’s how I got involved and developed a passion for rallying.

For various reasons my job came to an end, I was looking into doing other things, ideally I wanted to be involved in rallying somehow. Somebody asked me to do them a favour, when I was on an event, to do a bit of stage end stuff. I said: “I guess I can do it, I give it a go and will see what happens”, that was Cyprus 2005, and it went from there. I absolutely loved it. I didn’t think of doing anything else. I focused myself on being a stage end reporter, a commentator in rallying. I was incredibly lucky to be able to do that kind of job. My style seemed to suit that kind of job.

– Let’s imagine it’s Saturday during a Monte Carlo rally. Describe your day.
– Saturday is the strange one, it’s the day we move down to Monte Carlo, isn’t it. It’s a long day. We get up early, we make our way to the first stage, we always try to get at least an hour before the stage start, because there are so many things that can go wrong: weather condition, police, traffic, spectators, technology. So if stage is at 8AM, I want to be at stage end at 7AM, which in Monte Carlo means leaving the hotel at 4 in the morning. Basically it’s a long day going from stage to stage, if I’m lucky, I find a small french country restaurant, where I will be able to stop, but generally we’re eating and drinking on the go.

In the end of the day we’re heading down to Monte Carlo, down to the harbour where Service Park is located, catching up with drivers and the teams, the atmosphere. Than hopefully to bed by 9-10 o’clock at night. Generally I’m not in bed later than 10PM on a rally night, because I need my sleep. 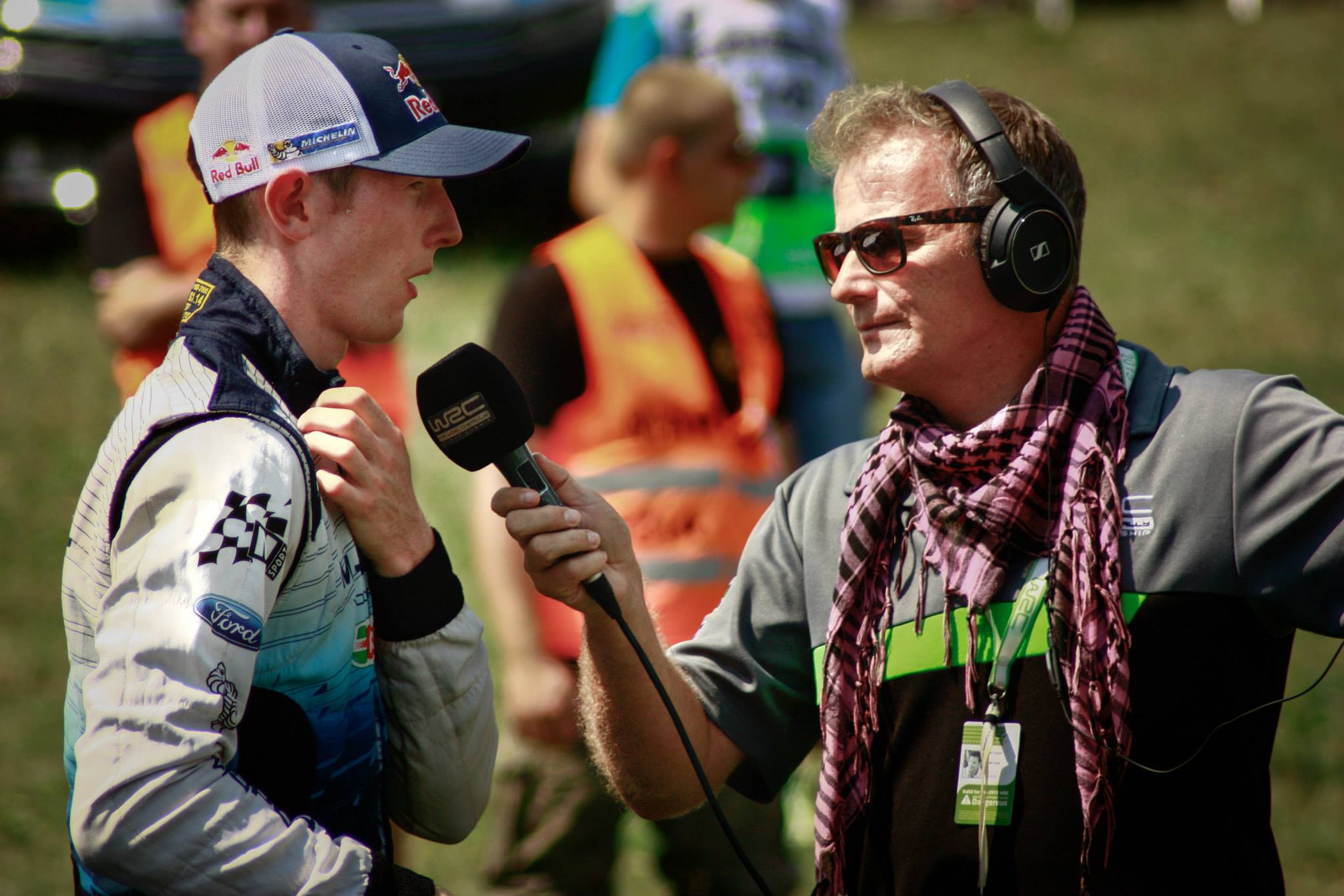 – You have any predictions for 2016?
– The most obvious one.. yesterday somebody published a betting chart, odds for Ogier were 2/9, which means you have to bet 9 EUR to win 2 EUR, I made the point that it’s a 20% return on your investment and it’s a safest investment you’re going to make in 2016. Sebastian Ogier will win the title without any question. Latvala needs to up his game, Mikkelsen has still a long way to go, Kris Meeke was closest to the VW last year, but he’s not in a factory car this year, he will do his best, but his target won’t be to win rallies. You can forget about the boys of M-Sport sadly, they will be lucky to win an event, so it’s a battle between the Volkswagens.

The one unknown factor this year, the main one, that might shake things up is Hyundai: personally I don’t think it’s going to happen, you know, because what they have to do is to built a car that isn’t equal to the Polo, but that is better. In equal cars Ogier will win. Have they done that? Well, we don’t know, that’s the only thing that keeps me with a tiny percentage of doubt. If this Hyundai is an absolute rally-winning-rocket-of-a-car, than maybe Ogier will have something to think about this year. Personally I think he will walk away with it by the time we’re in Spain.

– Why do you wake up in the morning?
– Mainly because my kids wake me up. Everything we do in life we do for our children, it’s about providing the best opportunities for your children and I’m very lucky to be able to provide by doing something I love.